Did a last min arrangement with a boatman from Tanjung Leman and off we go!

Didn't expect much fish but boatman almost shocked me by not even having GPS.

First spot is spotless clean as we went to unjam, suspect there is nothing left underneath.

Had a nice time fishing at the edge of drop off near the Tinggi Island, juvenile Queenfish are chasing baitfishes in packs and there is abudance of boilling surface action observed.

Didnt get much fishes other than Selars and small Queenie with appollo.

Uncle caught a 7lbs pounder Parrot fish and my my that was a real beauty.

it was all fun as we enjoyed using light tackle.

Tinggi island looks pretty decent and I hope to come back and explore the island itself later this year. 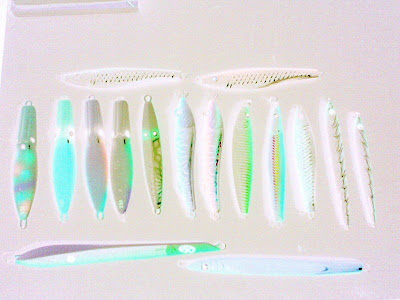 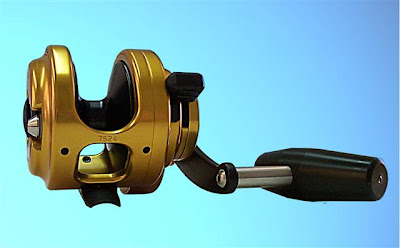 Ever since parting with my Shimano OJ4000P and Seavenseas Tuna Mania Rod.
I have not make any noticeble addition to my arsenals of heavy fishing gear.
Even the purchase of Tenryu Jig Zam was quite a mystery, but that rod might be destined for my dear junior at North Malaysia (Well that is another story)
Today, I am proud to announce the addition of a small but powerful reel into my collection, and that is the TIBURON QC 7524.
One of the smallest Tiburon reel around, it has a monster drag and it is very sturdily build.
My Calstar 760L finally have its worthy partner by its side.
A lever drag reel with a substantially high gear ratio at 5.3:1，I will use it as my bottom fishing setup and the line used is likely to be 65lbs Power Pro (Since I has abundance of it) or maybe I will go for those ultra smooth PE lines eg Varivas and YGK.
These PE lines cost an arm plus a leg but they are also very nice to jig. Take care of them well and you will get your fair share of money worth.
Maybe I will still be sticking to my beloved Saltiga Z30 in medium/heavy jigging, but undoubtly the robust Tiburon is in its class of its own.
Posted by rainbow7j at 12:41 AM No comments: 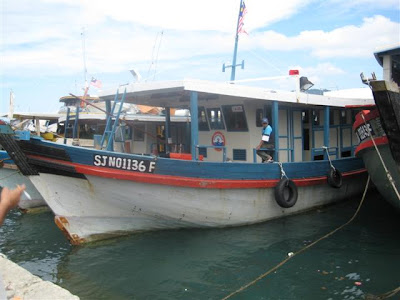 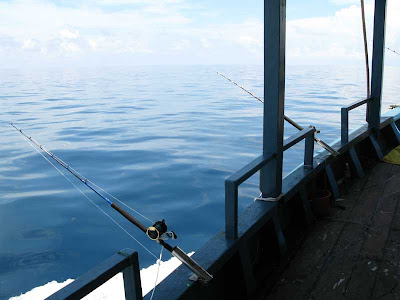 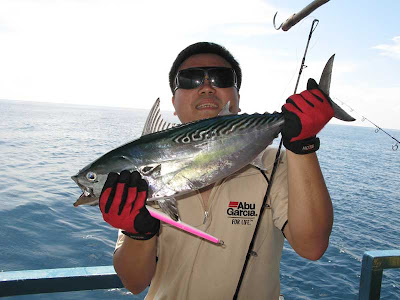 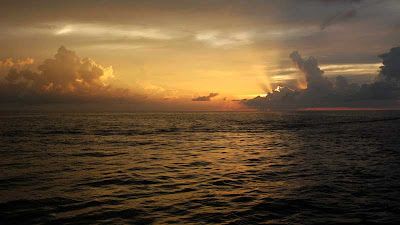 I wish to contribute this catch report to Cikgu Bwan, who had brought us out for such a fabulous fishing trip in Aug 2006. Ever since then, it has become an annual affair; We came back twice for fishing in 2007, and yet again in the recently concluded March 2008. Sabah has become a place where I will visit yearly, much to the dismay of my family members.They simply cannot understand why I need to disappear for 4-5 days every year.Let’s cut the story short by summarizing our catch this year.

We had a slow and disastrous start (usual something went wrong in the last min)There was a shortage of bait fish in the market, we managed to grab all we can, but it was in very bad shape.The Pasong was not fresh and very small in size. Only then the boatman informed us there is abundance of squids out there.Maybe we don’t need to use the rotten bait at all.So, with little hope for more baits we set off soon after lunch.It would soon appear that the catch rate was going to be very slow, maybe due to the rotten bait fishes.Well well, I told myself this was still the first day, not the time to get panicked yet.

Bite rate remained slow throughout the evening, and finally by night time we get some sporandic actions here and there. The fishes were in finicky mood this night. But the good news was squids were all over the place. The methods to catch the squids are either with squid jigs, or by just hooking a dead squid as bait and lure the other squids so we can scoop them with the net. We worked hard to collect more squids as baits as we knew our own bait suppliers are running short, nothing beats the fresh squids as baits.At this time the fish strikes were far and few, but some good size groupers, mangrove jacks, and some smaller species.Not a lot but it keeps us occupied. The fun part is still harvesting the squids, and that lasted well into the wee hours in the morning.

The second day morning saw the captain shifted to a spot quite some distance away, so many of us took the chance to catch a nap. The catch rate for the rest of the day remained slow, as the boat shifted from spots at 70m depth to 120m depth.We also noticed the current picked up significantly as the hours passed by.Well, there is no choice but the wait for the current to subsides or increases the numbers of sinkers.During day time, we saw the introduction of the Kerisi Bali or Ang Koli as locals fondly called.Some good sizes of them were landed, and they prove to a solid fighter, snatching the fresh squids we caught in the night.The sizes of the Kerisi caught ranging from 5-3kgs.

In between times we did some jigging but there were no takers. I was demonstrating my method of Slow Jigging, and out of blue moon, a fish hit on my 320gm Skill L Lumo Jig and was tamely brought up by me. It was a 2-3kg Skipjack Tuna or locally known as Tungkol. One more similar size Skipjack Tuna was caught using jigs by me again a few minutes later. Both were released unharmed after a quick photo session.

The actions picked up from 4-5pm onwards and this night proved to be better as we have some nice catch. A few 7-8kgs Green Job Fish were landed, and boy aren’t they tough fighter with brute force.But the prized catch was still the 18kg Grouper, who initially managed to get itself stuck somewhere on the seabed. As the angler dropped his head in despair, a couple of guys on board decides that in no way they are going to surrender and one of them starts man-handling the fish using gloves. He tugged and pulled with tender care as the PE line and leader might broke if the force applied is too much. After a tough and demanding 10-15mins, finally there is some movement from the fish down there. The lines were delicately handed back for the angler to continue his fight. And this time there is no escape for the fish and it tamely lost the battle. The titanic battle between the small angler and big fish was finally over in 30mins and it was a real team effort.

The bites gets slower after that, and at last I managed to hook up a nice 7kg Amberjack on my borrowed Daiwa LD50 on bait. It was released after a photo session. There is very slow current action and that affects the bite rate badly. Most of us went to rest after putting in a tough day.

The third day morning began earnestly as most of us had a good rest, but sadly the fishes are not cooperating. The weak and alternating current didn’t help at all, as we realized the there is 2 layer current underneath. We are getting badly entangled leaders and spreaders as times goes on.

Jigging is not effective as well, most fishes are feeding at bottom, and we are not able to produce any actions on the jigs at the bottom 20m. Our lines are badly affected by the top layer current and there is hardly any movement created by our jigging action throughout 100m. The reason being our lines were hit by top/mid layer current moving in opposite direction. Probably jigging with heavier jigs will be the solution but we do not have heavy equipment to try that. My PE3-6 rod max jig weigh is only about 300gm and the 320gm Skill Jig feels light as well.Somewhere in between these times, we did try out some new tools for jigging, eg. Hula-hula aka Madai Jig or Salty Rubber, and Inchiku. But maybe we do not have the skills to present them well enough to entice the fish. My friend got a hookup on a small Red Grouper on the Madai Jig, but that is all we had to show for.

It was until late afternoon my friend manage to hookup a Kerisi on jig. By this time, the bottom fishing kakis are having their hands full with the Kerisi. It was one drop one bite and the hit rate increased, and soon, before we can realize, our baits are running short. Eventually, the boatman decides it is enough and we moved on to our final night spot for the trip.

The last night which holds so much promise gradually turned ugly as winds and currents went into different direction. Every single swell which hit on the side of the boat caused it to tilled one side, making the boat so rocky we begin to find it tough to stay sober. Luckily the boat is quite huge in size and stabilizers are still working. However, many of us called it a day and in the end left a few hardcore anglers still harvesting the squids and trying to get something. I went to rest quite early and heard the guys had a few big takes but didn’t manage to hold on to it.

That marked the end of our March 2008 KK trip and yet it was another memorable trip. Once back on land, we went to visit Cikgu Bwan at his house.

We would like to wish him a speedy recovery from his current ailment and all the best for the future.

We might still meet again this year if there is a chance, and hopefully we will have another shot at the monster fish which resides in the deep water of Sabah again.
Posted by rainbow7j at 10:06 PM No comments: 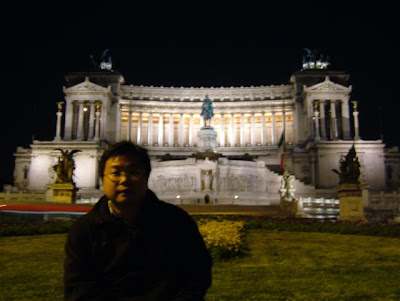